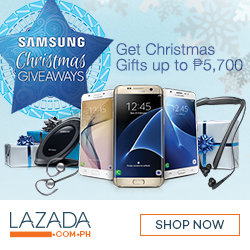 Samsung Philippines has teased the public of their Christmas 2016 Giveaways. Last Monday November 14, 2016, customers were serenaded by Jose Mari Chan as the brand unveiled the Christmas Giveaways promotion.

Seven (7) devices are up for grabs with discounts. Some are even bundled with freebies.

Both phones start at 32GB of storage and support expandable storage via MicroSD cards up to 200GB, so there’s no difference there, either. The 12-megapixel, dual-pixel back cameras on the Galaxy S7 and S7 Edge are among the best smartphone cameras you can find. Both products are perfect gift for the coming holidays.

Next is the Galaxy A7, The Samsung Galaxy A7 is powered by 1.6GHz octa-core it comes with 3GB of RAM.

It packs 16GB of internal storage that can be expanded up to 128GB via a microSD card.With its  13-megapixel primary camera on the rear and a 5-megapixel front shooter for selfies this is really a perfect gift

Also on the list is the Galaxy J7 Prime price which is P13,990 and comes with a FREE Level A Active earphones worth P3,099. It has a stunning brushed metal finish with zero camera protrusion ensuring an overall ultra slim design.

Its enlarged screen features flowing curved edges for optimal viewing and comfortable single-handed use will make every fashion person love the product.

For aspiring millennial on a budget, the Galaxy J7 (2016) is a good recommendation. The J7 2016 model will make someone enjoy the clearest possible photos in even the darkest of conditions with its superior and fast F1.9 lenses for both rear and front camera.

If quality is your primary consideration, the Galaxy On7 can be a great pick. In this promotion, this device comes with Level In ANC (Active Noise Cancellation) earphones worth P2,099.

The Samsung Christmas Giveaway promotion started on November 18, 2016 and will last until December 31, 2016.